The Malampaya Deepwater Gas-to-Power project utilizes state-of-the-art technology to extract natural gas and condensate from the depths of the Palawan basin. It then processes the gas in a nearby shallow water production platform and transports it across three provinces through a 504-km (313-mile) underwater pipeline. An onshore gas plant in Batangas receives the gas for further processing, before it is sent to five power-plant customers. 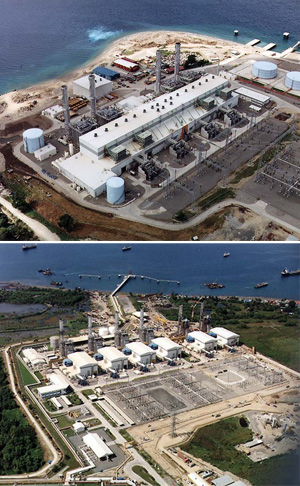 Malampaya gas is utilized for the government’s pilot CNG program for public utility transport, which consists of a mother and daughter filling station located at the onshore gas plant and at a Shell station in Laguna.

WHAT IS NATURAL GAS?

Dubbed as the fuel of the future, natural gas is composed of hydrocarbons found deep underground, or extracted through driven wells. It is formed beneath the earth’s surface over millions of years by the decomposition of organic matter, in much the same way that oil and coal are formed. Natural gas is 85-90% methane, with varying amounts of ethane, propane, butane, and other hydrocarbon compounds. Some condensate and oil will always be associated with the gas. In its natural state, the gas is colorless, odorless, and lighter than air.